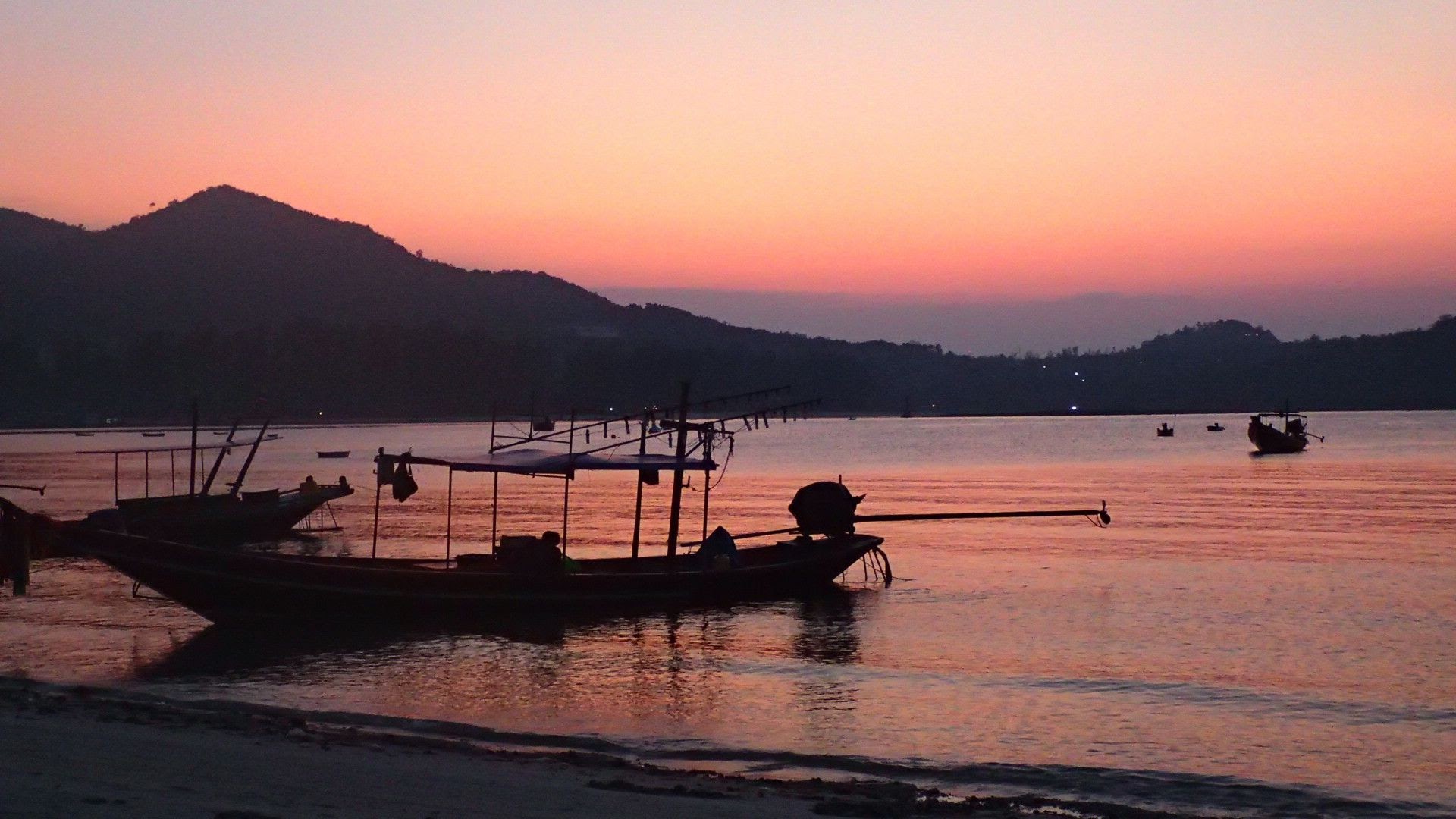 Southern Thailand – Koh Phangan Week 74: 07.04.2014 – 13.04.2014 Monday:- The bright sunlight shining through the bedroom window woke me this morning. So, I decided to get up and go for a run. This was a major achievement! Apart from one short run a few months ago I hadn’t run for nearly a year. Anyway, my running pants still fitted and so I set off. Although it was 8am it was already hot and so I ran along the road

The bright sunlight shining through the bedroom window woke me this morning. So, I decided to get up and go for a run. This was a major achievement! Apart from one short run a few months ago I hadn’t run for nearly a year. Anyway, my running pants still fitted and so I set off. Although it was 8am it was already hot and so I ran along the road keeping to the side in the shade as best I could. It was hard going and felt like I was a new starter again. It was a stop start run walk thing but I managed 25 minutes, which was better than I had expected. I was pleased and demoralised at the same time.

Bananas, yoghurt and cereal for breakfast. Then meditation, followed by more time on blog.

Lunch was just a snack on the veranda. The afternoon was at Worlds End where we sat under the cool air of the fan chatting with Ben, and of course doing more of my photo book which had an ever nearing deadline. This was going to be to the wire.

I had an evening swim in the ocean with Oli. The water was beautiful and warm although the evening air was starting to cool. What a location though!

After all that swimming (yeah right!) we treated ourselves to a great BBQ dinner. For a short time, whilst I had some yummy leftovers a cute ginger cat was my best friend. As we sat in the restaurant garden we could see flashes of lightening off in the distance. I was so distracted by the impressive light show that I didn’t even notice that I’d been adopted by a huge beetle on my way back from the outside toilet. It was hard to get rid of too.

We spent the rest of the night sitting on the veranda and talking before calling it a night.

I had a light breakfast before settling down to do some exercises. I need to start building my strength if I’m to be fit to face the Camino de Santiago later in the month.

It started to rain today, which was very welcome for this island. There’d been no proper rain for over a year and the natural stores, on which the locals rely, were all but gone. So our lunch was on the veranda watching the rain.

Once there was a break in the weather we walked to Worlds End to use the wifi and grab a drink, before going back to the beach for a swim and some time laying out in the warm but less intense evening sun.

A quick change and out. A drive around to the north west part of the island for a sundowner at Heaven cafe in the Sri Thanu region.

We had a fabulous meal. A kind of beach picnic under the light from a kitschy plastic lamp, and in the presence of quacking ducks – yes! I know! Ducks on a beach??? Weird! And geckos! Sadly, the bugs were out and they eventually drove us back home across the island. Still loving the scooter as a mode of transport.

My second run of the week. Still not easy but I have to push through this!

I was treated with breakfast at Lota’s (Worlds End cafe) before we took a spin out to Thong Sala. Leo had tasked me with finding her some accommodation as she was visiting the island once her Java retreat had been completed – which would sadly be after I’d already left. Oli suggested a place called Best View and so that’s where we headed. I booked a cute little place right on the beach – it would do her one night and give her the chance to find her feet.

From Best View we took a walk along the coast. It was quite a stroll so we took rest stops for a drink and then just sitting in the shallow waters. Another friendly dog sat in the water with us!

The rest of the afternoon was spent in the town doing a spot of shopping. Mostly in Macro and a street vendor to stock up on food.

We had an evening walk along beach and sat on the swing which hung over the sand. A very friendly gecko fell from the palm leaves above onto me and then just sat on my shoulder for a while.

Back at the house the big bugs were in full force and flying all over the place. Their little legs are very good at clinging to things so the only way to get them out was with a broom when they were mid flight. A bit like bug tennis!!

We had homemade for dinner – Oli made the quesadease and I did the salad. We sat on the veranda with a table covered in tea lights and sparklers. The rest of the evening was movie night on the laptop.

Another breakfast followed by another round of exercises, and then meditation.

The Internet had now been out in the house for three days and so it was off to Lota’s for the wifi and a light lunch. I made some really great progress and now I was pretty close to getting it finished. Just as well as the deadline for completion was Saturday.

Back to the house where after some investigation Oli managed to locate the router and reset it – tah dah we had wifi back!

Out to the beach for some time in the evening sun and a swim.

Then it was quick shower, change and out to a restaurant called Crave. We met Caroline and Joan at seven/eleven and drove in convoy across the island, up and down the steep slopes. The restaurant was much more modern than any we’d been to for a while. The food was fabulous. Their speciality being burgers and boy were they GOOD. I ate way too much, and it felt great!!!

Home and some more time on my photo book – I was on the home stretch now. The voucher I’d bought was for a 100 page book. I wasn’t going to use all 100 in the time I had left but I was up into the 80s. It was still going to be quite a souvenir!

So much for my exercise routine – I could NOT get up this morning. I was however, rewarded. Strangely!

During breakfast there were strange thudding noises coming from outside. On investigation it turned out to be coconuts falling in numbers from the nearby trees. In this part of the world there is a man who you can call out, with his three monkeys, to harvest your coconuts!! Ooo err! The monkeys were on very long leads and were instructed to climb the trees. They knew which coconuts to twist and they soon fell to the ground (the coconuts not the monkeys). The monkeys were well looked after and actually looked very content. They seemed happier still when they got to ride to their next location in the scooter sidecar.

More photo book work before topping up my tan and swimming at the beach for the afternoon.

Dinner was BBQ again at the Holy Grill. For 200b (£4) you get a big pile of food – and that’s no exaggeration! I ate too much again! Thankfully we walked home to walk off some of the excesses.

Another movie on the laptop and then I finally ordered by photo book – yee ha!

Morning exercises followed by a smoked salmon breakfast at Worlds End. Then onto the pool. How outrageous!! Someone else was using it!! We normally got the place to ourselves but today a Thai family had also decided to use the pool. The good news was they soon left and once again normality resumed! I swam, sunbathed, and took a walk in the shallows of the low tide. The beach dog from the previous week returned too to sit with me.

Back for late lunch – more homemade quesadilla with salsa and salad and some cheeky brownies I bought from Lota this morning. We also met the neighbours third new pup. All three of them are so cute.

Out to Thong Sala and the walking street.

The weather was better today and so the place was buzzing. There were so many food stalls, heavy duty water pistols for sale (we were fast approaching Song Kran, the water festival) and clothes stalls selling ridiculous shirts and t-shirts – the attire required for Song Kran.

We met with Bill again, revisited the delicious Larb balls, and listened to the jam session.

I did some shopping buying some NEW clothes and wonderful fruit.

Back via a new route to explore more of the island although it was bloody chilly tonight.

It rained in the night so was a cool morning – despite waking later (the usual nearby construction alarm call was taking the day off) I went out for a run. I did better and managed to dodge the early Songkran water throwers.

Leftover quesadila’s for breakfast plus pomelo and rose apples from the walking market – yum!

We took a stroll along the beach to the far end for a swim – for the first time in a while I could swim in water deeper than me. A spot of sunbathing too.

On the way home we stopped at the travel agent and bought tickets for the ferry to Samui on Tuesday. I was flying from Samui to Bangkok early on Wednesday before catching the flight home.

Back to the house for soda water with lime and cashew nut sundowners. What rebels we are!!

The plan was to have a special dinner in town tonight. We should have made a better plan. Perhaps stayed at home to watch the large gecko eat bugs.

It was Song Kran. As we turned into Macro for a few groceries before finding the restaurant, we got soaked by a group of backpackers. Much that I understand the fun of Song Kran I wish the tourists could differentiate between those who are totally game to join in and those who are dressed for dinner. The irony of it all was that Macro had sold out of the groceries we’d gone for. We drove around town and found the restaurant was closed too. It wasn’t our night!! We stopped for a delicious juice at the night market and then cold and wet we headed back.

On the way we stopped off for sticky rice and fried chicken at a street stall. A quickly rustled up salad completed our meal and we sat on the veranda to enjoy.