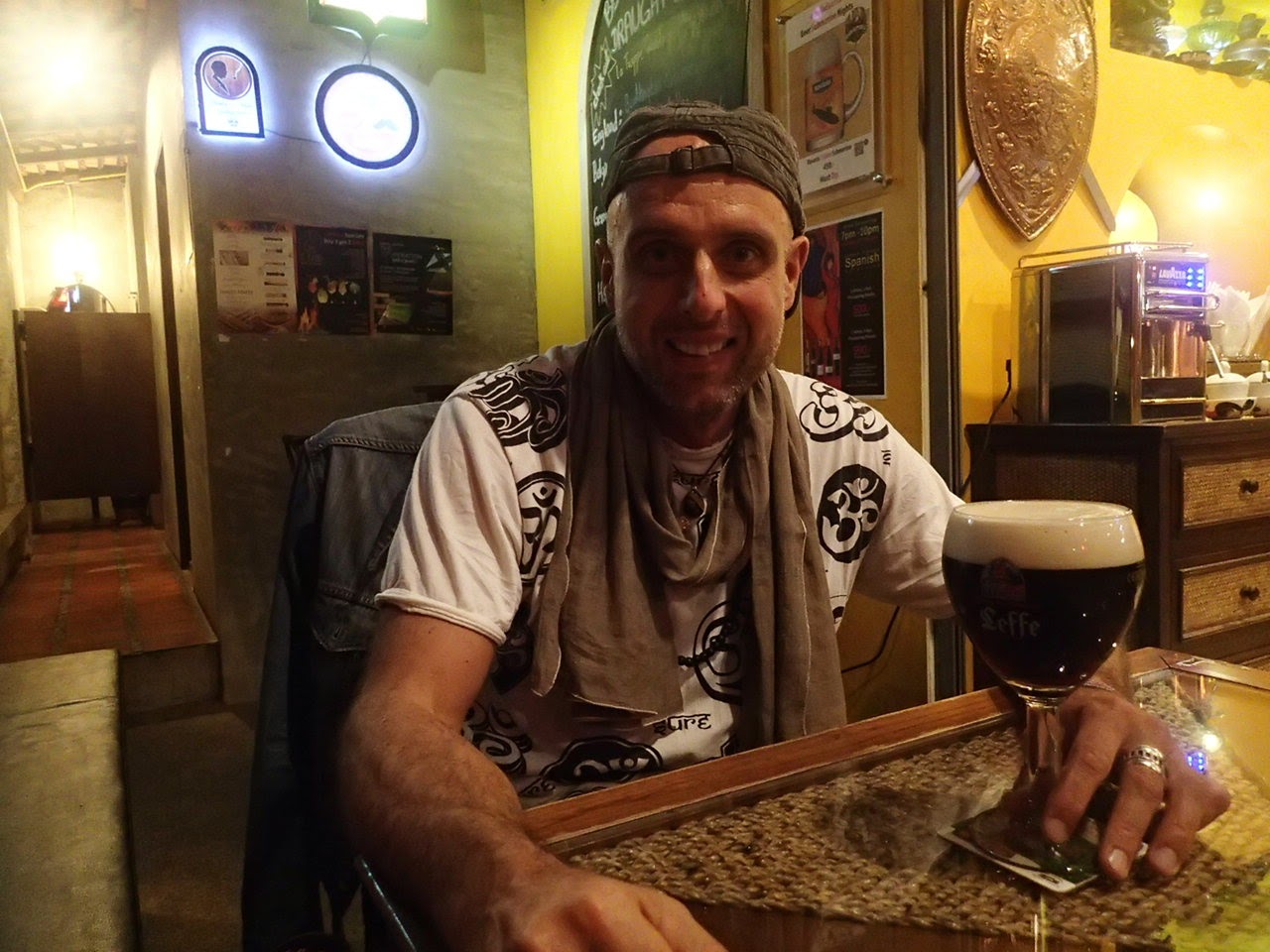 Northern Thailand – Chiang Mai Week 65: 03.02.2014 – 09.02.2014 Monday:- I think I was still a little shell shocked after all the excitement of my birthday. With the various time differences of my FB friends and family, my birthday seemed to stretch over three days. It was truly wonderful to receive face to face well wishes here in Chiang Mai but also notes from dear friends and family further afield. I took it easy today doing a workout in

I think I was still a little shell shocked after all the excitement of my birthday. With the various time differences of my FB friends and family, my birthday seemed to stretch over three days. It was truly wonderful to receive face to face well wishes here in Chiang Mai but also notes from dear friends and family further afield.

I took it easy today doing a workout in my room and then meditation. I was frighteningly behind on my blog and so I spent a good chunk of the day writing brief notes for each day whilst I still remembered them – thank goodness for my camera and photos. Some days just seem to blend!

So after spending the morning and afternoon updating my blog I felt a bit stir crazy. The fiercest heat of the day had passed and so I set out for the pool.

Ocean had given me a wonderful box (with a Flower of Life design on it – coloured stickers available if anyone wants any) of raw choccies for my birthday and I started my one a day regime. Raw chocolates actually have health benefits as the ingredients are so simple. Not like shop bought ones. If you’re interested look up the benefits of cacao – you’ll be amazed by this superfood. They give you a bit of a buzz too..

And apart from meals, and dodging the other kitchen inhabitants, that was pretty much my day!

Today saw more mediation followed by a trip out to see Ocean. I was helping her in her kitchen. I’d do some of the prep for her now almost famous raw treats. Chocolates, of course, but cookies, key lime pie and ginger probiotic. It was a full day by my standards but such great fun.

I left Ocean to meet Luise for dinner at Bird’s Nest – although once again dilly daydream went to the wrong restaurant and had to backtrack. Doh!

After grabbing some food we went to see a photographic exhibition. We were rather late and so still had half the exhibits to see when they started to turn off the lights. It would keep for another time.

By now it was late and after stopping to see Richard for a quick drink in Nimman I headed home.

As well as the usual meditation, workout, laundry, and emails I actually managed a morning swim.

The Green Hill pool as you know, is fabulous. And today was no exception. There were a few people around taking advantage of the heat of the day but not many actually in the water. I did my lengths and joined the others poolside for a spot of sunbathing. I met a Brit called Mel and we whiled away some if the early afternoon chatting. Wow, I’ve met so many people by the pool!

After my swim I headed towards home but stopped off at Ocean’s. She was running a workshop and I was interested to be an observer. The two attendees were really into raw chocolates and so questions and answers were fired around the room. I left at an opportune moment but not before sampling some choccies – yum yum!

A quick shower, change and out for dinner!

I had a very lazy day working on my photo book. It’s amazing how long it takes to select the photos I want to use (I have a lot!) and then decide how to coordinate and crop them! This could take a while!

In the late afternoon I went along to Jennie’s (the radio presenter who interviewed Leo the day I returned to Chiang Mai) gallery opening with Oli. It was held in a really cute cafe. As well as Jennie’s art there was bags of other great stuff – keep your wallet in your bag Louise!!!!! There was a live jazz band and the food was fabulous. When I eventually left I needed to roll my stomach out of there. Phew – too much food.

Once I got back home I had a chilled night, although the latest batch of papaya juice had been delivered so I managed to down half a bottle!

My attempt to drink half a bottle of papaya leaf juice a day continued. It’s revolting but I haven’t slept this well for months. It’s well worth the effort!

Breakfast was followed by meditation, laundry and sweeping.

I took a trip out to the Royal Project to stock up on food. Today there was a big market and I bought up loads of veggies including beetroots to try in the juicer. I also bought some bags of compost – there were stacks of old terracotta pots in the garden and I thought I might plant some up.

I went out for lunch. My original plan was to stop off at yoga tree but the traffic was manic and the roads were closed on the south moat road due to the flower festival. I ended up doubling back and eating at Birds Nest. What! No massaman curry!! Khow Soi was a close second option. Unbeknown to me Ocean and her friend Gina were upstairs and as they left they spotted me and we chatted a while.

I met Richard in the evening. There was a beauty contest on at Thae Pae gate which was a little surreal. The night was topped off with pancakes.

Saturday is bakery day – the ONLY reason I leave the house before 9. As usual a great gathering of friends all stuffing our faces.

I dropped by the GreenHill pool before heading home for lunch. I treated myself to smoked salmon!!

This afternoon was day one of a two day astrology workshop. Leo was teaching us the fundamentals of Astrology. It was taking place at the Namo yoga studio just down a little Soi (street) off the East moat road. I parked my scooter down a slightly less narrow Soi and away from the busy moat road and walked to the studio. The session started at 2 but in true Thai fashion people continued to arrive between 2 and half past. We soon got going. The basics were covered – what an astrology chart looks like and what are the attributes of the 12 signs. We also talked through the elements – fire, water, earth and air. Plus fixed, cardinal and mutable. I’m sounding like I know what this is all about – don’t I !!

The workshop lasted longer than expected – I think we were all so engrossed the questions flowed and the afternoon sped by. We’d planned to have dinner at Blue Diamond but once seated I found the menu a little uninspiring and so Leo and I ducked out and headed for the UN Irish pub. We joined Clare and her friend at a table and chatted. Now some days you can keep the healthy veggie dishes – tonight I had gammon steak and mash. Oh yes!! Richard joined the party an hour or so later and then we all got buzzed via FaceBook. Nina, who was staying at the posh Meridian hotel had been upgraded to the Presidential Suite as it was her birthday. Party on!!!

The hotel really was very posh and Nina’s suite was out of this world. 22nd floor with access only via a special reception desk on the 21st floor – strangely as none of us were dressed for such an evening (still in my shorts and t-shirt worn for the workshop) they looked at us with suspicion. We eventually made it in. The view over Chiang Mai at night, with Doi Suthep Temple way out in the distance, was breathtaking. We made full use of the suite until the early hours before finally leaving Nina to her fabulous room. How ironic to have an evening in such luxury then jump on our beat up scooters (parked in the basement away from the flashy cars) and head to own basic places of abode. A tad chilly without a jacket! What a night!

Needless to say this morning as an even slower start than usual. I did manage a meditation, which I’m glad to report, is getting so much better.

I took the short trip to see Ocean. She was working in the kitchen and I gave her a hand mixing up some of her secret recipes – all raw, for vegans. We also spent time taking arty photos of the craft items she’d bought. Two up on Ocean’s scooter, we went out to Eezi’s ‘Lanna Herbs’ store to stock up on Papaya juice. We bought 16 bottles between us and fortunately Ocean had a perfect bag which sat on the front of the scooter. She took me for lunch at a fabulous veggie restaurant for lunch ImmAim – I love going to new places.

Back to Oceans – I collected another batch of choccies – did I mention they are raw, with many health benefits and they give you a bit if buzz. Seriously look them up!

A quick change and out to old town to meet the crew at the Sunday market food court for the rest of the evening.