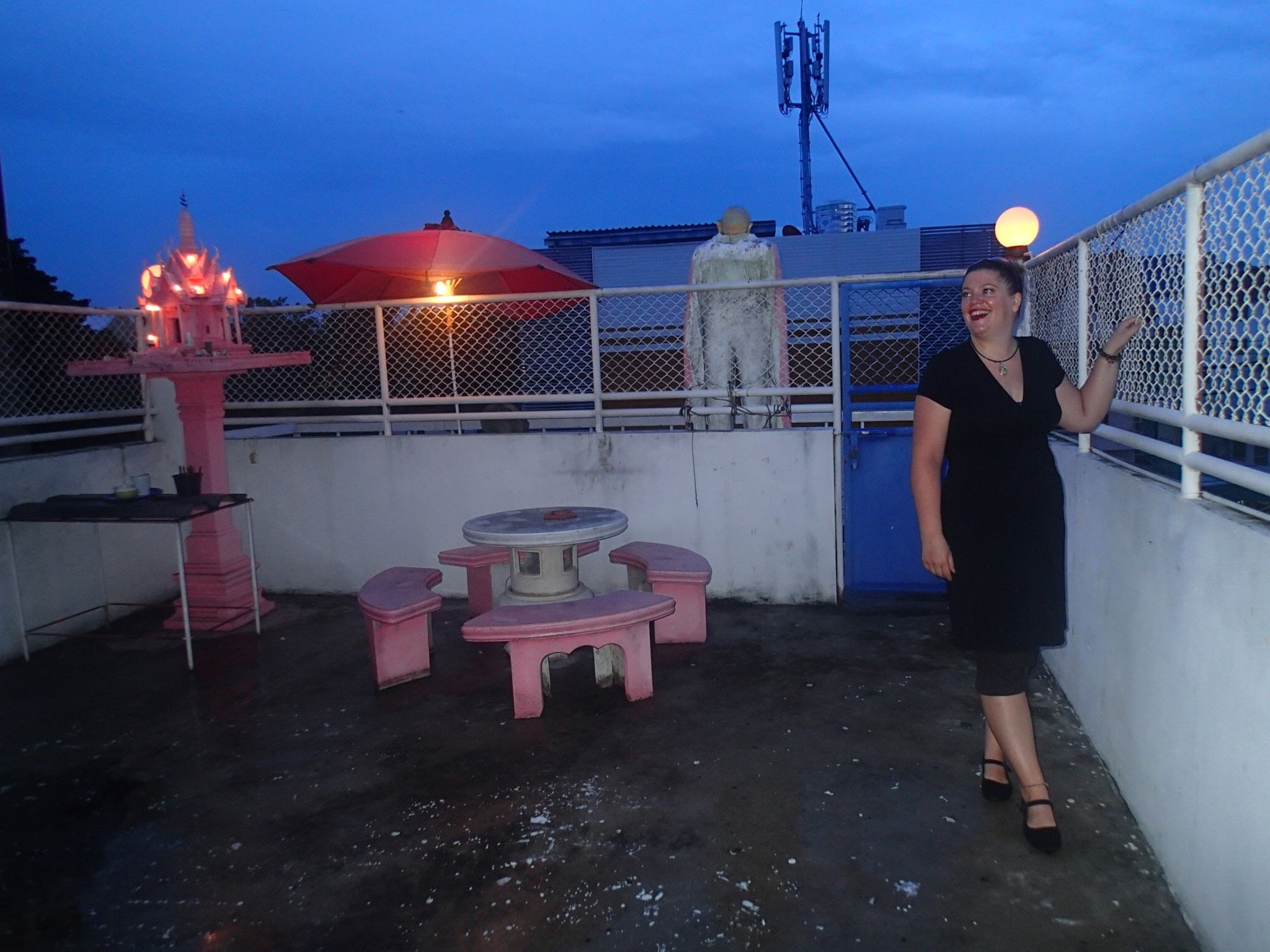 Thailand Week 41: 19.08.2013 – 25.08.2013 The week started with clear, rash less, skin but swollen hands and feet and lethargy. Otherwise I felt OK. I was up early as Leo invited me to join her at a 9:30 Chi Kung class. It’s a bit like Tai Chi with emphasis on slow deliberate moves and controlled breathing. The class here in Chiang Mai is the brainchild of a Chinese medicine man and it was really him she wanted me to see.

The week started with clear, rash less, skin but swollen hands and feet and lethargy. Otherwise I felt OK. I was up early as Leo invited me to join her at a 9:30 Chi Kung class. It’s a bit like Tai Chi with emphasis on slow deliberate moves and controlled breathing. The class here in Chiang Mai is the brainchild of a Chinese medicine man and it was really him she wanted me to see. He is able to assess someone’s well being and help with acupuncture if needed. He may be able to shed some light on my virus. It was a bit of a trip out of town but I followed Leo on my scooter and she took it slow. The trip took us out into beautiful countryside again where there were big well kept houses and locals with even bigger smiles. My consultation was later in the morning so I decided to take part in the Chi Kung class. Only a small number of people in the class but wow some amazing personalities with quite spectacular histories and stories. It’s a powerful discipline which I completely underestimated. I think carrying the virus didn’t help. After learning the first three moves I felt dizzy and had to sit down. The next thing I knew was I was covered in sweat, was being picked up off the floor by Leo and another Chi Kung teacher, and carried to the sink as I thought I was going to be sick. It was a VERY strange 20 minutes but gradually my body stabilised and I regained control of myself. I was in very safe and caring hands. Once I had settled I spoke with Herman, the medicine man. Truly mind blowing man with a quite awesome talent. He only took my pulse yet was able to pretty much quote my medical history back to me!!!!!! He gave me some interesting information about myself, told me to change my diet, keep away from the street food, and then gave me a session of acupuncture. I was told to lie down and was left to relax for an hour or so. There was such compassion from everyone I interacted with that morning. I felt so much better and took it very easy getting up. We got home safely and I spent the rest of my day with my feet up. Just when I thought I couldn’t slow down anymore than I had already my body told me different.

Tuesday was Leo’s birthday and after a slow start, I’d slept better than the past few nights, I popped around the corner to her home and spent the morning and early afternoon chatting. I spent the rest of the afternoon in my room feeling decidedly worse as the day progressed. Despite a few reservations and a scooter which didn’t want to start, I decided to go to Leo’s birthday party at a bar called CNX. I went early with Leo to make sure everything was set up and ready. I glanced at the menu – wild boar, crocodile, ostrich, and peasant were amongst the offerings. I hadn’t seen anything like that anywhere in Thailand, and other parts of the world for that matter.

The guests started to arrive and I actually knew quite a few of them so was able to chat away. That was before the chills set in though. I really didn’t feel well and decided to cut the party and head back. It was dark, raining and I had my scooter. I made it back and went straight to my room. It was a bad night as the fever kicked in as well as a couple of other symptoms which kept me in the bathroom – nuf said I think.

My room was where I stayed for most of the week. I had little appetite for a day or two and once it returned I could only eat very simple foods. It was during this week that I got to try rice soup. Now, I thought it would be a clear broth with rice in the bottom. Oh no, it’s a very thick white soup – the rice is completely broken down and absorbs the liquid. It’s mostly served with balls of chicken meat, an egg and shredded spring onion and ginger. You also get a little bag of a kind of chilly vinegar and also some little crispy stuff to sprinkle on top. Taywin, bless him, made the journey over to see me and handed me some electrolyte powders, paracetamol, charcoal tablets (which were an absolute godsend) and the aforementioned soup. As i was in a delicate state it was the plain meatless, eggless version and was delicious. It was the first food I’d had for a few days and couldn’t eat it all in one sitting. But it tasted just as good when I reheated later. Rice soup – my new best friend. My days seemed to go in pairs – one day I felt better and the next I took a step back. Gradually though I worked through the symptoms and started to feel better although incredibly tired. I could take short trips out to stock up on paracetamol and the like and also a rice soup. It didn’t take much before I needed to head back to sleep.

As I started to feel better and my appetite really returned my beloved rice soup lost its appeal. I needed food that couldn’t be taken in through a straw. Something with texture. Leo took me to an organic restaurant and I had a blissful 20 minutes eating my way through scrambled egg and toast. You do crave home when you’re not well but it almost felt like I was seeing the town a new when I took my little walks around the block – and I still loved it.

Thank goodness my strength was returning as I needed it. Sunday morning I geared myself up to make the call to the Virgin Atlantic call centre in the UK. I had a flight pre booked to take me to Borneo on the 30th. My wanderlust has left me for now and I really didn’t want to go. I had to amend my flight – a no show cancels the entire ticket. As I have to leave Thailand by mid September anyway I decided to change my flights so I could fly from Chiang Mai to Bali. I could enjoy a change of scene, get my ocean fix, and test my love of Chiang Mai. If I still want to go back I could get a new visa at the Thai embassy in Bali. It seemed like a good solution. It took a good hour to get this resolved – when I say resolved, I mean discussed. Apparently my ticket hasn’t been recorded correctly on their system and they weren’t sure if I could make the changes. I bought this type of ticket for that very reason – I knew I would want to make changes. Anyway, some progress was made but I was asked to ‘just’ call back on Tuesday. It’s bank holiday on Monday. Come on Virgin make things easier for adventures on a budget!!!

I braved the Sunday market in the evening. I didn’t buy a thing – a sure sign I’m not myself! More than enough for one week.

There’s a distinct lack of photos this week, apologies. But here’s a rather hurriedly taken shot of my friendly neighbourhood squirrel – he’s a speedy little critter. It’s amazing what keeps you entertained when you’re going stir crazy!