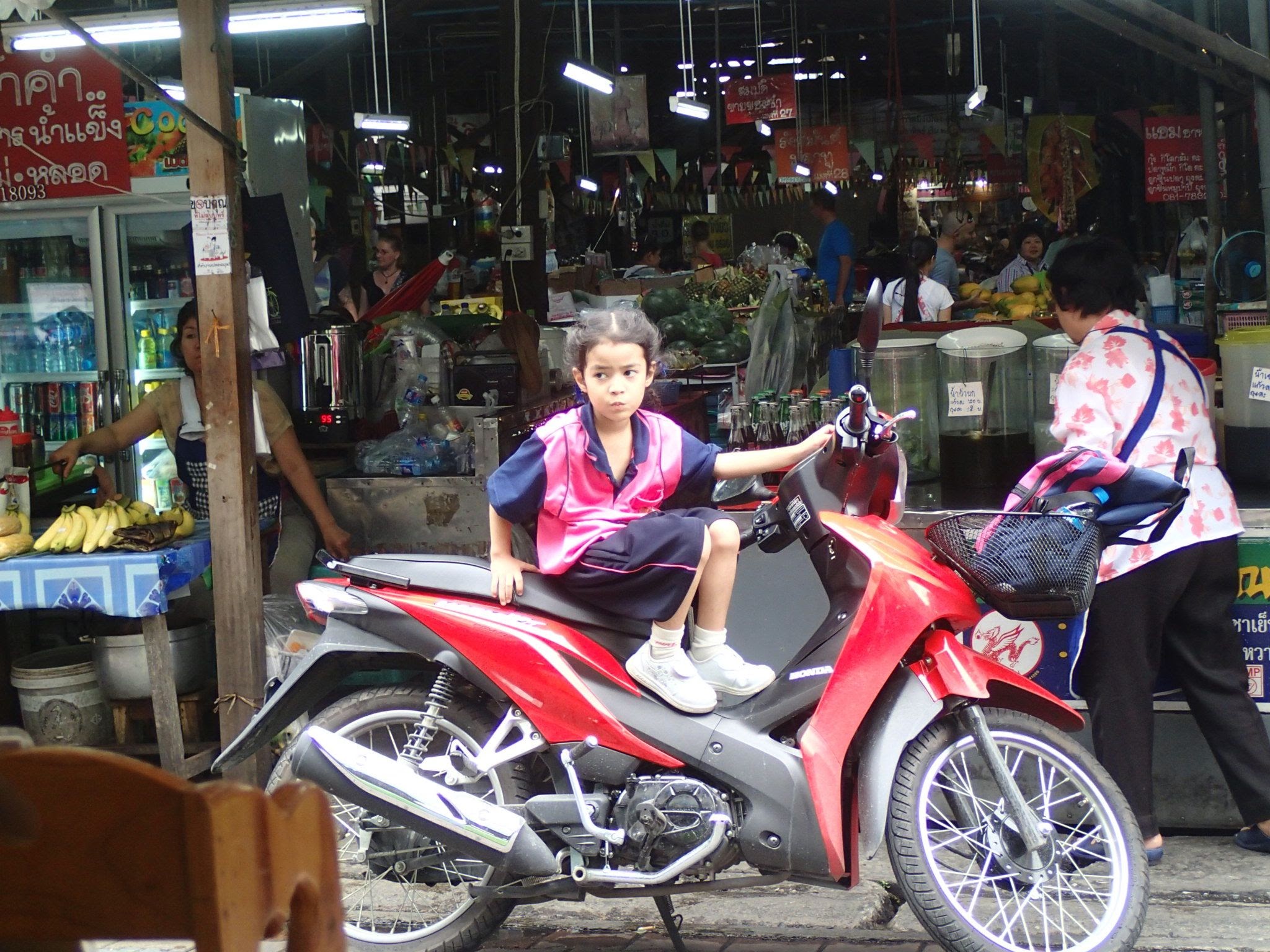 Thailand Week 36: 15.07.2013 – 21.07.2013 Monday:- Woke up sore but it was back to training today, which wasn’t getting any easier. Lunch was at another new huge restaurant – Pad Thai. Despite the language difference it was quite obvious that T was being chatted up by the waitress – bless. Off to the Post Office for T. It had been closed over the weekend and so was packed. Take a number and wait. At least it gave me the chance

Woke up sore but it was back to training today, which wasn’t getting any easier.

Lunch was at another new huge restaurant – Pad Thai. Despite the language difference it was quite obvious that T was being chatted up by the waitress – bless.

We made a stop at a shack of a auto workshop to give my bike the once over and make a few tweaks for free. The cost of full repairs would only be known once I see how much of my deposit I get back.

A quick stroll around the Monday Market. The usual food, produce, clothes, amulets (T bought another – he must have 20), and all sorts of stuff you can’t imagine having a use for, ever.

It was starting to rain so time to make a dash for cover. We waited at ts place for it to stop. It rained, rained, and rained, and just when we thought it would never stopped we were proved right – it did start to rain in the bathroom. Amazed the roof lasted as long as it did. No my photos are not all the same, check out the water levels.

At last the rain stopped and just as quickly as the rain had started the water subsided. Time to head back. Waew grabbed me as I got in. “what was I going to do with the room – my month was up on Friday”. In the absence of any real plan I would probably stay longer, but not sure for how long. The monthly tariff was far better than paying daily or even weekly. I would probably pay for another month (just over two weeks of weekly rent) and see how things go – I could always leave earlier.

More rain, rain, rain. Just the time to do a spot check on the street wiring. These people are crazy!!!

A quick dinner dodging the showers and home.

Breakfast at another new place. The tv was on and the lottery numbers were being drawn. It’s big over here. There are tickets on sale everywhere and they are relatively expensive. I have no idea the value of the prize money but it must be worth it. Anyway, it’s quite a long winded official process watching the numbers being drawn. Fascinating!!!

We had an audience while we were eating. Two dogs came and sat by us with those ‘please give me some food’ eyes. One was soooo cute and still very puppy like.

A quick stop for a coffee and lemon, to collect laundry, and to get my haircut again. I should have had more cut off the first time. It was still dry at the ends and constantly getting tangled. We parked at some random place and a lady who spoke hardly any English got out her scissors and started cutting. Please god, let this be OK. I should have more faith – it was fine.

While I was at the ‘hairdressers’ T got a quote for the bigger bike repairs. I really need to find out what the bike rental place is going to charge me so I can work out if independent repairs is better value.

Fortunately it was over in a flash and I could make my way back to the old town and my little temporary home. Taywin trained and I took a stroll to the Market. It may not have been raining out of town but it was in town. An umbrella was called for and thanks to a parting gift from Nicole (I think she was just dumping stuff no longer worth carrying – whatever the reason I was grateful for it today) I had one. I bought a shed load of fruit – the local Thai food is great but it’s carbs plus fried, fried, and fried and not doing anything for my waistline. Fresh, fresh, fresh is what’s required. I also booked in for another Chi Nei Tsang massage for tomorrow – Om had returned from Switzerland and I wanted to resume the treatment.

Emails were the order of the rest of the evening. Dinner, between dodging the rain, was my fave followed by a fried !!!!!! dessert a bit like a doughnut. I’m so missing my Nicole diet – vegetarian and healthy mostly. It continued to rain and so I joined Taywin in the bar for a while. B, the Turkish bar owner, was gradually doing up the place and painting was on the cards for tomorrow. We were roped in to help. Could be fun!!

The alarm woke me up today at 8. I had massage at 10 and wanted to get my meditation in. Even 8 feels early.

The massage was still uncomfortable but in different areas today. Om had been on a training course and so used some slightly different techniques. I’d also been working out since the last appointment and so my muscle tone was better. I had way more of those warm ‘have I just wet myself’ sensations and across a broader area, the warmth emanating down my legs and through my feet. This is a good sign. Next appointment in a weeks time.

I had some time and bought some baked goods from the bakery and fruit from Addy’s before heading off for training. The training was a killer. I’m not sure if it was the impact of the massage but my body just didn’t want to move today. Anyway, I made it through.

Lunch was a quick pit stop before heading back to the old town. It was threatening to rain but a really wanted to have a walk. I grabbed an umbrella and walked down the east wall of the town and out through Tae Pae gate. I knew my general direction but before long I was in new places and not entirely sure where I was. The rain held off and I could enjoy the walk and the new sights. I never get bored of watching Thai life.

The evenings are such a wash out. It is rainy season after all but it means you have to stay very local and be quick if you’re going out on the bike. As predicted the rain came and we dived into a nearby restaurant. So many of them look completely dodgy but serve amazing food.

It really was an early night for me today. It was pouring and I really didn’t want another night at the bar. Good thing I enjoy my own company.

I know I went training and I know I went out for two meals, the rest as they say…..is history – sorry this day is a blurr. Must try harder to make notes each day!!! Sorry guys!

Training. My feet are killing me from the skipping which apparently means I’m not doing it right. Note to self for next time – learn the right technique for skipping.

After training treat of freshly made iced lemon drink (yay no sugar) and then chicken and rice for lunch. If you know about how the Thais eat, which obviously Taywin does, your rice dish is served with a bowl of soup on the side. Who knew!!

We went back to the second hand Market. Determined not to buy anything I came away with 4 tops. Pretty good for 100THB – 2 quid, give or take. Saw the most amazing platform boots. They were so lovely the seller was keeping them. They were display only – kind of grateful for that I may have been tempted to buy them.

Back to my room for a quiet afternoon then out for dinner in the central covered Market. If only we had got there before the rain started. Pretty soaked. Fresh spring rolls and Tom yum soup. The soup was so spicy my nose wouldn’t stop running which is why I lost my nose stud. Thankfully retrieved, cleaned and reinserted. Is that TMI?

Breakfast early in my room today. Some fresh fruit and a salad.

I did set out for training but the rain started pretty much as soon as I left so was forced to turn back. My confidence on the scooter has grown so much and I do have a ma-hu-sive rain poncho hidden under the seat but I’m not risky riding in the torrential rain. The roads get slippery and it’s just no fun.

It was an afternoon of Midsomer murder episodes – they’re free, so don’t knock it. Pretty much all the channels on the TV are Thai and other nationalities. It actually really nice just to watch and listen to something familiar that I can understand. CSI with Thai dubbing just isn’t the same.

After the rain i went to the market and had a foot massage in an attempt to soothe my tender feet. Same Burmese guy from before so he gave me short shoulder massage. Oh the pain, why am I so tense there?

More rain, more meditation, and to break up the day I painted my toes. Lunch was indoors – more fruit and too many of those very addictive dried bananas.

Dinner with Taywin. We had to make a quick trip back to his place as he had placed a bet on a number of football games and was pretty excited as he thought he’d won. We collected the betting slip to check it out – sadly he didn’t win this time.

Back into town to be dropped off at my place. Saturday night and I’m back in my room before 11. I’m so rock and roll but I’m loving it!!

Today I was up and out before 10:30 and was treating myself to French toast. It’s almost becoming a Sunday morning ritual. I’m not sure I’ve ever been to the bakery this early – it was packed but I snuck onto the edge of a table and enjoyed banter in the place.

I wasn’t training today so I had the day to myself. I had a wander around for the afternoon – I had thought of getting a Song Tao to the cinema but after walking to what I thought would be a good place to pick one up, I realised it wasn’t going to happen today. It was a big Buddha day and so most of the tourists, and hence the taxis etc, visiting the temples in the town. It was hot and after 2 hours of walking, very sweaty. At least it limbered up my feet.

Back to my room for a shower then out for another foot massage. Yesterday’s massage seemed to help and so I was hoping for more of the same. I had a different person today and although all foot massages are wonderful this wasn’t nearly as good.

I went to the Sunday market early – earlier than I usually go anyway, although it was still dark by the time I got there. It must be more popular during the early evening because it was packed. Urghhh – too many people. I did treat myself to dim sum from one of the stalls though. More rain forced people away from the market and many stalls packed away early. They are very tolerant of the rain here and just get on with things.

Not so many photos this week. I think I’ve stopped being so much of a tourist and a tiny bit more like a local. Cool!