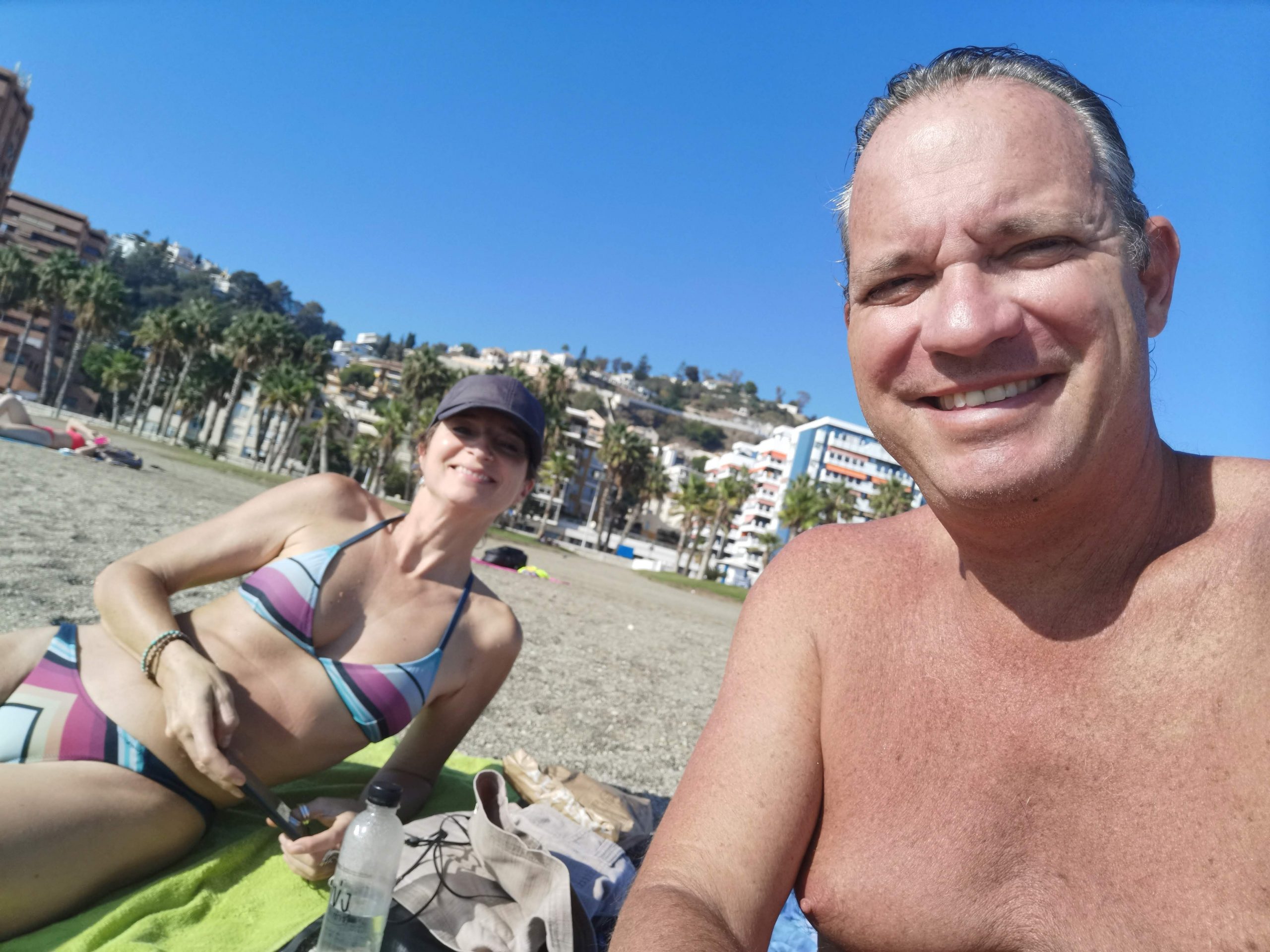 And so it was that we found ourselves in Malaga! Neither of us had been before and if I’m honest I’d never thought to visit until quite recently. We’d been hearing good things about Malaga during the past year and so decided to check it out. We’d arrived tired and under the cover of darkness and hadn’t really taken in our surroundings, so our bleary eyes were pleasantly surprised by the morning view. Breakfast was in sight! The town is

And so it was that we found ourselves in Malaga!

Neither of us had been before and if I’m honest I’d never thought to visit until quite recently. We’d been hearing good things about Malaga during the past year and so decided to check it out.

We’d arrived tired and under the cover of darkness and hadn’t really taken in our surroundings, so our bleary eyes were pleasantly surprised by the morning view. Breakfast was in sight!

The town is beautiful! You can’t help but be in awe of the architecture. For the most part the wide streets are pedestrianised meaning you have time to look around you and up, making for great wanderings! It would be perfect if it wasn’t for the pesky tourists – oh wait, that’s us!

There’s plenty here to keep you occupied for a good couple of weeks.

We spent an afternoon at the ‘Museo de Malaga’. There’s tonnes to see in this light, airy museum. Check out the mosaic – almost complete, it was found in the 50’s by someone renovating their house! That’s definitely an Antiques Roadshow find!

One place we never made it to was the Picasso Museum. All 285 paintings on display were donated by Picasso’s family. Picasso was born right here in Malaga and only 200 meters from the site of the museum! Poetic!

We did make it to the Alcazaba fortress though. It was built in the 11th century and is the best preserved of its kind in Spain. It’s a steep walk up to the top but there’s lots to see along the way and a few shady places to take a break from the intense sun. It’s a magnificent place with many beautiful details which provide a real sense of a once lived in vibe.

If you have the legs to continue further you’ll reach the Castillo de Gibralfaro. Only the castle ramparts, a few outbuildings, and courtyards remain. It doesn’t have the lived-in details of the Alcazaba but the view from the top is breathtaking – mostly because it takes so much darn effort to get there! You can spy the mostly unused bull ring in the town and also look far out to sea!

Back in the middle of town, you can’t miss the Roman Amphitheatre. We took a guided tour. It’s not billed as guided but we found it hard to refuse our escort! The amphitheatre was built in the 1st century so it’s OLD!

It was interesting to read why the amphitheatre is incomplete. Many of the original Roman stones were used to build the foundations and main structure of the Alcazaba. Since then the theatre was neglected and over many centuries covered by soil. It was only during a recent renovation of the Cultural Center that the theatre was rediscovered. The Cultural Centre was subsequently moved to a new location allowing the entire theatre area to be excavated. That work has now been completed and the theatre is open to the public….for free!

We visited Malaga Cathedral and the adjoining Iglesia del Sagrado. The cathedral was originally designed to have two towers but, due to lack of funds, only one was finished. This gave rise to the cathedral being affectionately referred to as La Manquita, loosely interpreted as “one-armed woman”. Wandering around inside and looking up at the vast beautiful ceilings did feel kind of spiritual!

Some days later we took a guided tour, not with the cat this time, during which it was pointed out just how unfinished the cathedral still is and apparently, will remain!

See what I mean! What happened to the top layer?

That’s quite enough of that – it was deafening!

This is way better! Wonderful music from the side steps of the cathedral wafting through the warm evening air! Audience of two – me and that odd bloke!

During the aforementioned guided tour, our guide shared the best-kept secret in town (you just know it’s not really a secret when they say that!) – El Pimpi! Once an 18th-century mansion house, it’s now home to one of the oldest restaurants in Malaga. It’s part-owned by its very own native celebrity, Antonio Banderas. Come here and you could find yourself rubbing shoulders with a Hollywood star or even a religious leader (wink, wink – you know who)! And if you’re super lucky they may get the check! Thanks, Dude! (I really do try not to pronounce it dooood!)

We, and by that I mean me and the religious leader, sat at the bar enjoying our tapas and soaking up the vibe!

Nowadays, walls in many towns and cities showcase local artwork – I think it’s still called graffiti but that really doesn’t do the creative talent justice. Malaga has joined the party when it comes to graffiti art. Just take a look at these! All discovered just behind where we were staying.
(I’m not saying a Durex dispenser counts as art but seeing one installed on the side of someone’s house was a first – it is kind of artistic!)

You might just be able to make out the totally adorable little dog sitting on the steps. If not, here’s a close-up – Olly made a new friend, as usual!

In the afternoons the beach beckoned us. Us and a number of others. It was never really busy on the beach but just enough people gave you a sense of belonging. You won’t find soft, white sand in Malaga but there’s plenty of sun and the water is clear. It also offers a wide promenade for running!

There’s more artsy stuff near the beach too with some pretty creative movie posters! Who is Firu?

For some welcome shade and colour, and to people watch, there are a few small green park areas dotted here and there. The perfect place to take a load off around dusk!

We mostly walked around the town, along the beach and the harbour area but we did venture across the river to explore once. When I say ‘river’, I mean footie field! What happened to the water?

Eating is an easy pastime here. The supermarkets are cheap and stocked with all the good things in life! And oh yeah, there are just a few (hundred) fabulous restaurants, so you can eat out too!

Pizza again! Our last meal of the trip was at our fave restaurant. This pizza was to die for!

Already looking forward to our adventures next year!

Or not, as the case may be!

As of June 2020, COVID19 lockdown has been in place for a number of months. Being outdoors has become more precious than ever, so too family and friends who are no longer within easy reach. We can only dream of international travel but when it returns, as well it will in some new form, we’ll be ready to embrace a new adventure…with pets!

In the meantime, a few nameless friends have graced us with their presence (whilst observing the appropriate social distancing – apart from the cat who invited himself in and seems to love us more than life itself!)