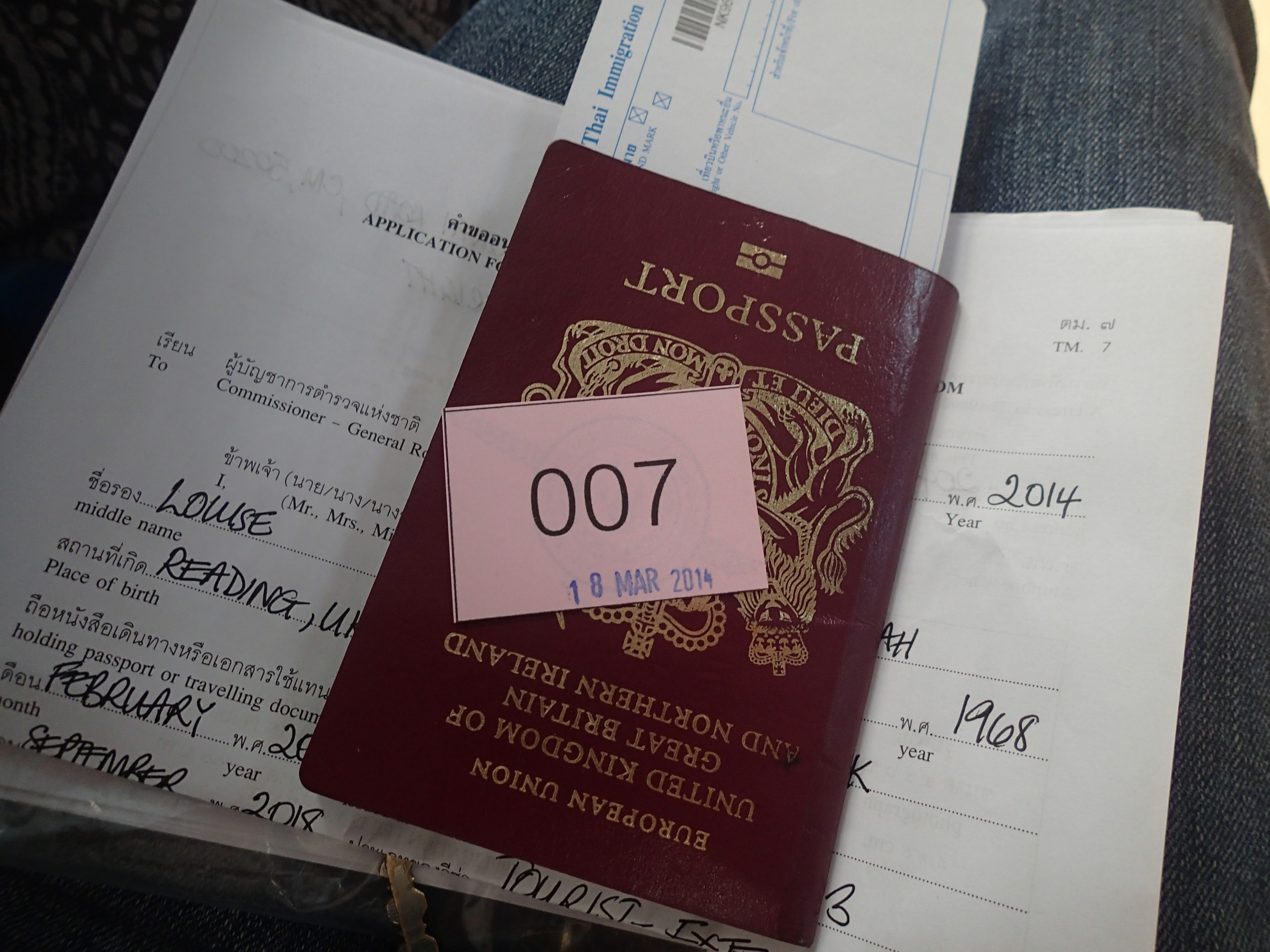 Northern Thailand – Chiang Mai Week 71: 17.03.2014 – 23.03.2014 Monday:- I woke naturally just after 6 and briefly, very briefly, considered getting up to go to immigration. As I had another option, I decided to roll over and go back to sleep. After that it was a slow morning of meditation, amongst other things. Then off to Ocean’s place to meet before we set off to immigration for real. In the past I’ve always got up early to get my

I woke naturally just after 6 and briefly, very briefly, considered getting up to go to immigration. As I had another option, I decided to roll over and go back to sleep. After that it was a slow morning of meditation, amongst other things.

Then off to Ocean’s place to meet before we set off to immigration for real. In the past I’ve always got up early to get my visa extended. Ocean had convinced me that it’s just as straightforward if you go at 2pm – a massively more civilised hour. It was soooo busy that we only got as far as the door before we were turned away and asked to come back tomorrow. Grrrr – I should have gone with what I know, got up early, and got it sorted. C’est la vie!

So, with a free afternoon I stopped off at Khad Suan Khow to buy the tickets for Leo’s theatre production on Sunday. I’d agreed to organise everyone and bulk buy. I also managed a swim at GreenHill. I met Richard and Marie there, and then Ocean joined us. Once again, for maybe the 4th time this week I lost my earring – luckily finding it again. I bought them in Australia – they are truly boomerang earrings (aye Ange).

Ocean and I had dinner at ImmAim, before I headed home to pack for tomorrow. I was taking a short trip to Chiang Dao.

Today was an early start. The alarm went off at 5am!! I finished my packing and set off for immigration. It was dark but already to could see and smell that it was going to be a smoky day. It’s burning season and so the air is filled with smoke as well as being mixed in with the usual pollution around the moat. It’s really not very nice!

I’m not usually up this early but I have to say I enjoyed the almost empty roads, the wafts of laundry detergent as I passed by the racks of wet clothes hung up to dry, and as I approached the immigration office the fragrance of the morning blossoms. Even through the pollution!

I parked up my scooter and took my place by the immigration office door. By my reckoning I was about 10th. Ocean joined me not long after I sat down and shortly after that Richard. We chatted the time away and around 7am Maggie also joined our little group. The office door opened early at 7:15 which meant we could sit inside and wait our turn. I was indeed number 10, which then became 007 in the tourist visa extension queue.

The real application processing didn’t start until 8:30. But as we’d waited the three of us had joked with the officer on the front desk. He’d even shared his smelling salts with us when Ocean, Maggie and I had covered ourselves in a sarong to block out the coughs and sneezes from the guy sitting behind us. Getting in his good books was definitely a bonus as he pushed through our applications. The time flew past and we were all done by 9:30. Phew – I could legally stay in Thailand for another 30 days!

I set off on my scooter to Oli’s. By 10 we’d packed up our bags and loaded them onto his scooter and were on our way to Chiang Dao. It really was a smoky day and so today, for the first time in ages, I wore a mask over my nose and mouth. The journey took us a little under 2 hours – I so enjoy sitting on the back of a bike and watching the world fly by. The roads were busy, dusty and pretty polluted so when Oli mentioned we were only 10 minutes away I was a little concerned at what sort of place we’d be staying. I should know better. We soon turned off into a side road and the mountains appeared, the road narrowed, became quieter and the surrounding area green. The birds sang above us, the insects chirped and the butterflies flitted by. This was lovely..

We had a little bamboo and wood cabin which was basic but had all the necessary creature comforts including free shampoo and soap (what a treat) and a fabulous view.

We had an amazing lunch – the food is top class here – rinsed off after the dust of the roads and just chilled. As the day cooled we took a stroll through the village, stopped at Nest I for a gin and tonic sundowner – jealous much!!!!!

After changing into mosquito unfriendly clothes we had another delicious meal for dinner. There was a deck filled with huge cushions and lit with decorative lanterns and that’s where we stayed for the rest of the evening before turning in.

The early morning light filled the room despite it being another smoky one. The birds were in full voice and the trees swayed gently in the breeze. First things first, breakfast.

We then set out along the village road to the monastery. Many, many steps – which was fairly sweaty in the heat – took us to beautiful temple at the top of the hill. So peaceful up there! Back down the steps and then onto the cave.

We stopped at one of the little temple stalls to buy amulets. These places are everywhere – the amulets are a true tradition here and the prices range from cheap to pretty damn expensive. We picked up a couple of cheap ones.

I wrapped up in a sarong to enter the cave temple and then we headed inside. Like all cave systems this was amazing. Cool, damp, faintly lit and full of the sound of dripping water. The limestone forming beautifully sculpted stalactites. We didn’t go all the way into the cave – it was suggested you take a guide to do that.

Back out and along the road (hope the little kiddie finds it’s patiently waiting toy!!) and to The Nest for an afternoon by the pool.

The water was surprisingly cold with an added challenge – it was surrounded by bees. Big ones! I only managed to spend a few minutes in the freezing water before retreating to the loungers. By the end of the afternoon the bees had moved away from the edge of the pool and now seemed very interested in us. Time to make a sharp exit!

We had a very late lunch. Another amazing meal! Then out on the bike for a ride around the local area. We took some side roads and soaked in the green of the rice paddies that were strewn with water buffalo.

We were still full from lunch so skipped dinner choosing to stop instead at a little street vendor for some deep fried Thai-stylee donuts with bright green dipping sauce. We got about 20 for 40p.

We chilled back at the nest under the lanterns before calling it a night.

The morning light, and the dogs, woke me.

Quick shower and then out for breakfast. We then headed out to find the nature walk. It’s badged as an hour and a half walk but we completed it in just under an hour – and neither of us are that fit. It was lovely to walk through the shade of the trees, listen to the birds, and pick our way through the rocky uphill, and then downhill, path.

It was pretty hot and sticky by now and so we took to the pool again for the rest of the afternoon.

We skipped lunch, instead taking a trip around town for a bit of an explore and then spent time time sitting at a little place by the river.

By dinner time I was hungry. Just as well, it was BBQ tonight. Wow, and what a feast it was. There were so many choices of meat, grilled veggies and then a separate table of pasta, salads and so many sauces and dips.

We tasted everything. It was all amazing. Despite being fit to burst we couldn’t end the evening without dessert. And all washed down with a couple of gin and tonics. There is a god!

Needless to say after a couple of drinks and so much food, sleep wasn’t far away

Today we were leaving

Breakfast was fairly low key as we had eaten so much the night before and my stomach was still groaning.

The smoke in the air was super bad and so we suited up with masks, protective glasses and helmets before heading out. At least it was cooler today.

We stopped off at the great little coffee shop at Mae Rim for refreshments before starting the last leg to the old town. The pollution got worse as we approached the old town. I was very glad to get back and shower off the grime from the journey.

I spent the evening relaxing back at home and replying to emails.

I had a lazy morning. I didn’t bother to go to the bakery, so I used the time to catch up on laundry, and household chores.

There was a new creperie opening up outside town and a few of us were going. I had no idea how to get there so I met Richard at Thae Pae gate and we went in convoy. It wasn’t what I was expecting and we were the first to arrive. There was much sitting around doing nothing and listening to the French, the bulk of the new arrivals. Then the food was served and everyone seemed to spring into action.

After more chatting and taking a peak at the birds and terrapins Valerie and Antonio owned, we headed back to our own places.

After the usual morning I headed out to the pool. I really need to up my fitness if I’m going to get the most out of doing the Camino de Santiago at the end of April.

After the last few days of uber pollution levels over Chiang Mai the sky was blue and the air clearer. I think the freshness of the air spurred me on and I managed 100 lengths.

I did a quick shop at RimPing, showered, changed and headed out to KSK. Leo was in a comedy play and I’d organised a group of us go. There were 16 of us in total and everyone, to my surprise, turned up on time. It was a tiny theatre, seating around 50 people, so needless to say Leo got a fair amount of the cheers and applause. It was fabulous.

It was Richard’s last night before he headed home to Marseilles. And so we all went on to the UN Irish pub for a meal. We were given the private room upstairs and put all the tables together. A very happy close group of people having fun!

The night was over before we knew it and there was much hugging as Richard said his final farewells to many of the group. Boo!